Anxious? Ear Acupuncture Can Help, And You Can Do It Yourself. 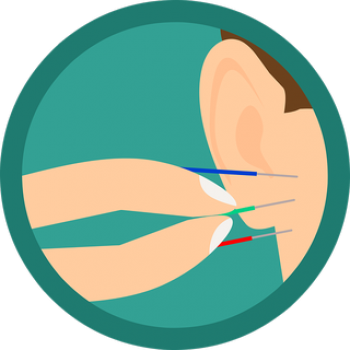 Due to the COVID-19 pandemic, mental health conditions such as anxiety and depression are at an all time high. Telemedicine has significantly improved access to some aspects of healthcare.

However, many people remain hesitant to undergo non-urgent medical treatments that can only occur in-person such as dental cleanings, physical therapy, and acupuncture.

If you are uncomfortable undergoing an in-person acupuncture session, I can teach you how to perform auricular acupuncture from home that is medically proven to help with a variety of symptoms such as pain and anxiety. And it does not even involve needles!

Acupuncture is one of the oldest forms of practice of traditional Chinese medicine. The first written medical documentation was composed in 100 BC, with corresponding acupuncture needles made of gold and silver found in the tombs of this time. Some alternate theories actually trace the origins back to the Neolithic Age (6500 BC) due to the archaeologic discovery of Bian Shi, sharpened and pointed stones that were heated and applied to acupuncture points to treat neck and back pain.

The history of acupuncture in the United States is a much more recent development. People in Western societies such as the United States are becoming more health-conscious and are seeking alternative and preventative therapies instead of relying on expensive and potentially harmful medications and procedures to treat diseases such as musculoskeletal pain conditions and psychological disorders. Many large academic research centers such as Yale, Duke, and Johns Hopkins have developed alternative medicine departments and clinics that are built like luxurious spa like wellness centers. This is due to the increasing amount of evidence-based research that has been published in just the past 15 years that has proven the efficacy of acupuncture as an effective treatment option for conditions such as neck and back pain, headaches, and knee pain.

Interestingly, the origins of evidence-based acupuncture in the United States can actually be traced back to the 1970s due to a unique American public health problem - heroin addiction. At Lincoln Hospital located in the Bronx, ear acupuncture was introduced by Dr. Michael Smith as an adjunct therapy to patients who were receiving methadone treatment for heroin detoxification. The specific acupuncture treatment became known as the National Acupuncture Detoxification Association (NADA) protocol, which consists of applying tiny acupuncture needles to five acupuncture points in the outer ear. The five auricular acupuncture points, Sympathetic, Shen Men, Kidney, Liver, and Lung were chosen as they provide benefits such as analgesia, sedation, and relaxation. These acupuncture points are also used to treat other conditions such as mental weariness, fatigue, inflammation, and headaches.

There are many benefits to the NADA protocol. Medical research has shown the NADA protocol reduces the relapse and readmission rates of residential heroin treatment programs. It has shown to improve the outcomes to other addictive and abusive substances such as alcohol and cocaine. In addition to an adjunct to standard substance abuse treatments, the NADA protocol has commonly been used to treat psychiatric conditions such as anxiety, depression, and post-traumatic stress disorder. In fact, due to its immediate calming effects, the NADA protocol helped treat first responders during the aftermath of Hurricane Katrina and the attacks that took place on 9/11. Overwhelmingly positive results were realized with reported benefits including reduction in physical pain and improved sleep.

The NADA protocol has broad applications in treating many health conditions. In my private practice in New York City, where I specialize in neurologic and musculoskeletal pain conditions, I frequently use the NADA protocol during acupuncture sessions. The protocol helps treat patients who suffer from a chronic pain condition as well as symptoms of anxiety and depression related to the physical and psychological impact that their pain condition causes. Patients undergoing NADA protocol acupuncture report a sedative and relaxing effect and a general sense of well-being, somewhat similar to the effects of having a small glass of nice wine. In regards to insurance coverage, I’m really glad to see that there is an increase in health insurance companies covering acupuncture treatment for my patients. This shows that acupuncture is being recognized as a more mainstream, legitimate treatment option.

Here is how you perform ear acupuncture from the comfort and safety of your home.

Possible side effects of the NADA protocol can include drowsiness and headache. Acupuncture is also known to cause orthostatic hypotension, or low blood pressure when arising from sit to stand. Please be cautious if you are elderly or suffer from low blood pressure.

For more experienced people, press needles or press patches can be used. They are tiny, thumbtack-like needles attached to a patch of tape but must be used with caution as press needles do puncture the skin and could introduce infection if improperly used.

During these uncertain times of the COVID-19 pandemic, it’s likely that stress and anxiety levels increased. If you know anyone who may be suffering, please feel free to share this article with them and encourage them to seek professional help. Get the right care from the start at NY Spine & Rehab Medicine.

powered by BirdEye
Book An Appointment